Opening Remarks from the Chairwomen

This was our slogan for this year's TCAAT. This year happens to be year 101 of the Republic of China. A new century of the Republic of China begins. Chinese residents in the San Francisco Bay Area cheerfully gathered at the annual tournament. Our athletes did their best to create records again. The 28th TCAAT took place at Foothill College in Los Altos, California on July 22, 2012, starting 9 a.m. It was my second time to organize the tournament. I inevitably felt nervous about it. With a gingerly attitude, I thought about how to start planning this year's TCAAT. Fundraising was my first priority. I began to organize all kinds of fundraising events. I went to Taiwan to visit government officials at the Sports Affairs Council, the Overseas Compatriot Affairs Commission, and the Foreign Ministry, as well as distinguished entrepreneurs, to gather support. Here I would give special thanks to the strong support from the Republic of China government. Everyone's support made my initially uneasy heart feel much more confident. After returning to the U.S., I actively searched for talented people to help me organize the tournament. I visited tycoons in different industries, non-profit leaders, enthusiastic volunteers, distinguished Chinese Americans who are active in mainstream society, and mainstream community leaders. Fundraising activities began.

Our fundraising dinner took place at the San Francisco Bay Area Chinese Culture Center on May 23. Our enthusiastic volunteers invited director of the Taipei Economic and Cultural Office in San Francisco, Mr. Chiang Kuo-Chiang, as well as director and assistant director of the Culture Center, Mr. Lu Yuan-Jung and Mr. Su Shang-Jie, to host the fundraising event with us. Mr. Chiang won a sensational applause by singing three songs in Mandarin, Taiwanese, and Cantonese, respectively. He displayed his outstanding language skills and singing talent. That was greatly helpful to our fundraising event. Mr. Su graduated from Cheng-Chi University in Taiwan. He learned international ballroom dancing as a college student and created a international ballroom dancing club at his university. At our fundraising dinner event, he performed Latin dance with Yi Jung, former TCAAT committee director. They charmed the entire audience. That added to the flamboyant atmosphere of the fundraising event. Here I would like to thank them and Mr. Chiang for all their efforts. This fundraising event definitely boosted all our volunteers' morale.

The TCAAT had 30 competitions. Some had always been many Chinese residents' favorites. Others depended on sports-loving volunteers to make them happen. Enthusiastic volunteers were the key to our success. They were our most important driving force. From planning 30 competitions to organizing the fundraising dinner, to organizing today's opening ceremony, all the volunteers cooperated and put in a lot of effort to make everything happen.

This year's TCAAT had three new competitions which were popular with adolescents. They were: guzheng, Chinese sumo and scout knotting. The TCAAT has increased its items through the years. This year it had 30 competitions and held pre-contest games. It was a family friendly outdoor activity. On the day of the tournament, there were volleyball games, track and field games, a celebrity walk contest, swimming contests, special-ed children's games, adolescents' and children's drawing competitions, family games, paper cutting art demonstrations, and singing and dancing performances. Besides all the performances, we had booths that provided various snacks and Taiwanese appetizers. There were also lectures on cancer prevention and other health issues. The event promoted family love, exercise, competition, health, joy and good food. It gave everyone an unforgettable great time! The annual event is a large-scale outdoor activity that has been deeply appreciated by the local Chinese community.

The TCAAT has a tradition of torch passing to symbolize sportsmanship. With many athletes' and community leaders' participation, this year's TCAAT torch was passed from Cupertino to the plaza in front of the Culture Center, to San Francisco Chinatown, and then to Foothill College. All the previous TCAAT committee directors and Chinese community leaders passed the torch around the field and then ignited it to open the tournament.

The opening ceremony had many VIP guests from mainstream society including state senators and assembly members, county supervisors, mayors, city council members, distinguished Chinese Americans, Chinese community leaders, non-profit leaders and representatives. The national anthems of America and the Republic of China were both sung. There were also dragon and lion dances, as well as other dancing and drumming performances at the opening ceremony.

From planning to executing everything for the TCAAT, I worked with over 400 enthusiastic volunteers. It was their communication, understanding, harmonious relationships, team spirit and devotion that made the TCAAT a great event for the sake of Chinese residents in the Bay Area. With an extremely grateful heart, I thank all the volunteers, and the officials of the Sports Affairs Council, the Overseas Compatriot Affairs Commission, the Foreign Ministry, the Taipei Economic and Cultural Office, and the Culture Center, and Chinese Consolidated Benevolent Association. With everyone's support and collaboration, this year's TCAAT successfully, smoothly and joyfully took place. May everyone stay in good health and cheerful spirits!

You are cordially invited to the Opening Ceremony of the 28th Taiwanese & Chinese American Athletic Tournament. We would like to celebrate the one hundred and one anniversary of the R.O.C. During the tournament we will compete in the most prosperous activities enjoyed by Chinese in the Bay Area. The ceremony will be held on Sunday, July 22nd, 2012 at 9 AM at Foothill College. 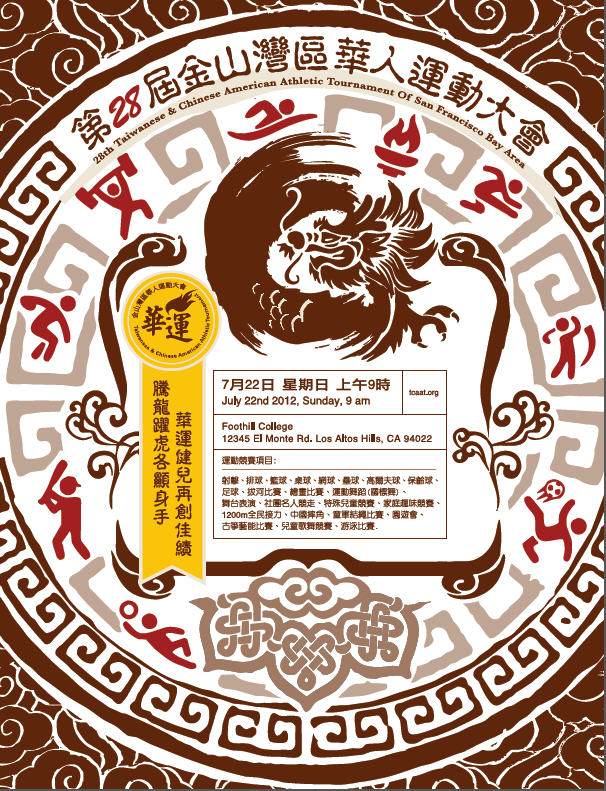 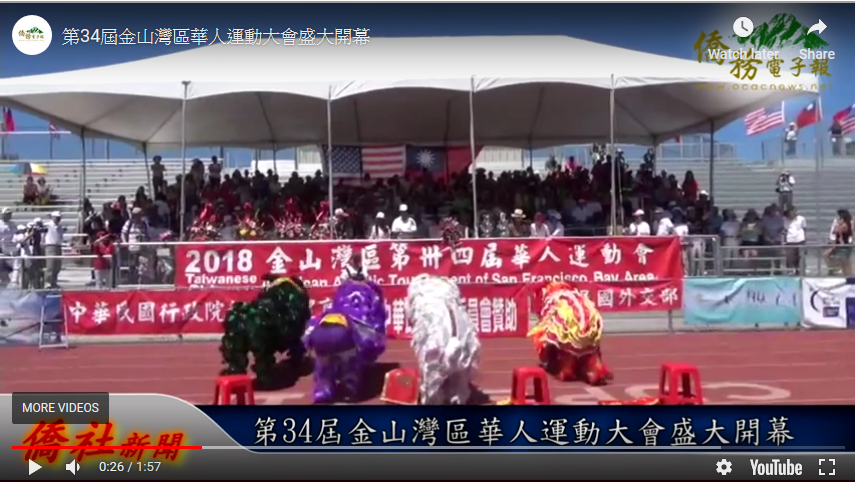